I have just finished a ner.manual labeling job (to train a new NER model), and I have already saved the results to DB. However and due to last-minute found inconsistencies in the "tagging instructions", there are some errors that I would like to correct. Is there any chance to "reload" the already manually-labeled texts, so I can check and correct the wrongly-labeled terms, while keeping the good ones, without having to start all over again from scratch? Is this possible?

BTW, I have checked all the Quickstart, but I did not find a fitting match for my use case (or so I think).

Is there any chance to "reload" the already manually-labeled texts, so I can check and correct the wrongly-labeled terms, while keeping the good ones, without having to start all over again from scratch? Is this possible?

Are you aware of dataset: prefix you can use for source? "Loading from existing datasets"

For example, let's say your existing dataset is called ner_dataset. However, you found errors in that dataset so you want to now run a recipe (e.g., ner.manual) so it'll pre-highlight your old annotations.

Does this solve your problem?

If so, thanks for the heads up. I think this would be a good tip to add to Quickstart!

I am re-opening this case, as I have noticed some inconsistencies with the purposed solution.

I will go step by step in my dummy example, so you can either follow those steps and spot some error from my side, or reproduce them and quickly troubleshoot, if that's the case.

First, the data to be used:

Next, the experiment design: 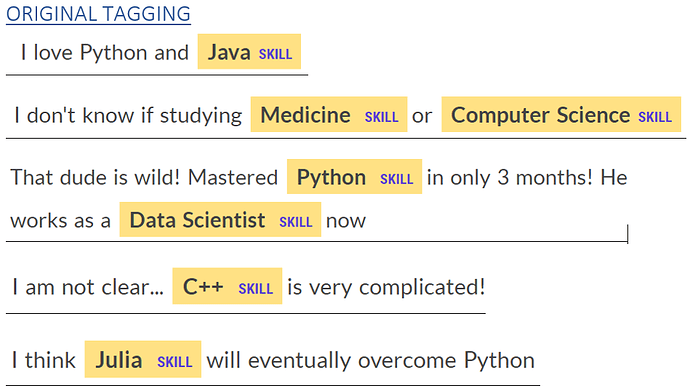 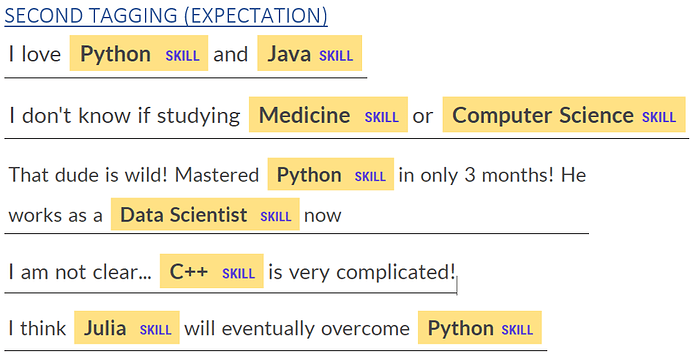 But what I got, was the following: 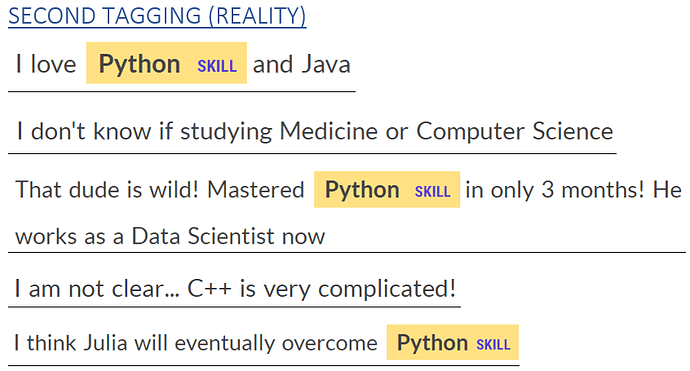 As conclusion, I can see that the --patterns work OK, but dataset: is NOT doing what I expected (i.e., I have to run through the tagging all over again, which is something I want to avoid).

First off, huge thank you for your wonderful reproducible example. I was able to diagnose the problem very quickly. I can't thank you enough for the time you put into your questions that helps us to more quickly help you.

It looks like the default behavior is that pattern labels override pre-existing labels. I didn't realize this either until I went into the code base. I found a related post:

Just to make sure I understand the problem correctly: You have some annotated examples that weren't yet annotated with label 8. You have patterns for label 8, and you want to add those pattern matches to the examples that are already in your dataset. If you run a recipe like ner.manual with patterns and examples with pre-defined "spans", those spans will be overwritten. That's expected – otherwise, the results would be pretty confusing, you'd constantly have to resolve overlaps between existin…

Ines mentions that this is intended:

If you run a recipe like ner.manual with patterns and examples with pre-defined "spans" , those spans will be overwritten. That's expected – otherwise, the results would be pretty confusing, you'd constantly have to resolve overlaps between existing spans and matches etc.

The post also gave me an idea to programmatically create a new dataset that uses the pre-existing annotations and also appends the patterns using PatternMatcher.
Then use that new dataset either for training or again in ner.manual to correct.

One thing that was tricky was that I realized I needed to account for any overlapping (double counting) spans that were in the pre-existing and rules. Hence I tried to create logic similar to spaCy's filter_spans that checks whether the span has been included. I couldn't robustly test but it seems to do the trick.

Now try to run that code to create a new dataset labeled_data2 (it has the original labels plus the patterns).

Then rerun ner.manual with dataset:labeled_data2 and without the patterns (since that code puts in the patterns) so now see both the patterns and the original labels: 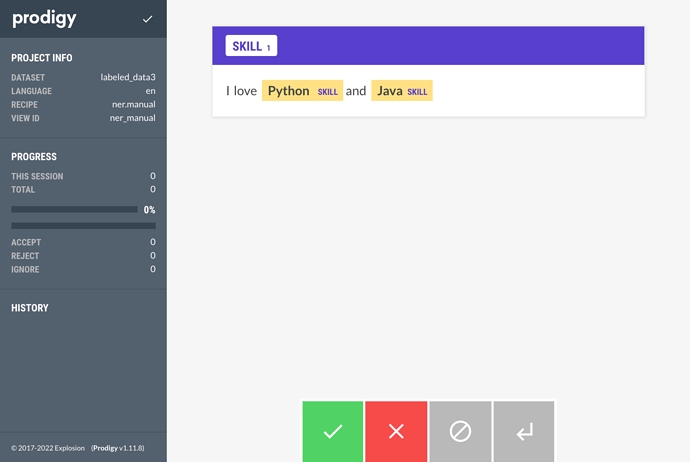 Also you can run print-dataset to get a faster preview: