Hi, I'm trying to run the built in review recipe on my annotated dataset. Unfortunately I'm getting an error on the web-app: TypeError: Cannot read properties of undefined (reading 'forEach').

Here is the screenshot: 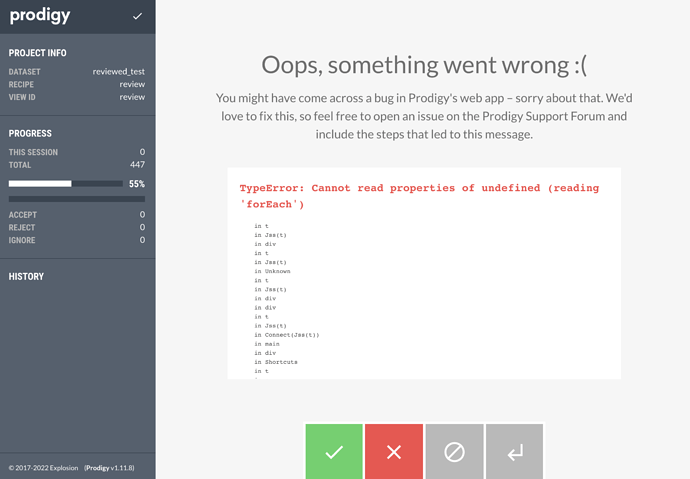 This is the fairly standard looking command I'm running to launch the prodigy server:

PRODIGY_LOGGING=basic doesn't give me any errors related to this, only the UI.

It seems to be that enabling --auto-accept is what causes this error as the recipe works fine when I disable that option. Of course, it massively speeds up the review process to not have to click through all the non-conflicting annotations, so that option seems quite useful. For info, the dataset was generated using a slight adaptation of the textcat.correct recipe from the Github. Thanks.

Thanks for the information and welcome to the Prodigy community

You may have found a bug. We really appreciate the info.

Could you provide 1 example of a record from your database so I can try to recreate on my end? I suspect it'll be standard for the classification UI format, but I want to be sure.

Feel free to change the example if there are any proprietary details in your example.

We'll try to provide an update later next week if we're able to confirm it's a bug or if we can find a solution.

Thanks for the very quick response! I did a bit of further digging on my side and I think it's in-fact not related to the --auto-accept option, instead due to a quirk of my dataset (but one that prodigy should perhaps handle more gracefully).

I think it's due to the following:

I uploaded an example debug.jsonl file with the above quirk and you should be able to reproduce the error with the below. For info I'm on Prodigy 1.11.8:

I apologize for the delayed response.

It looks like "config":{"choice_style":"multiple"}, accept=[], is present in some of my examples, but not in others. I assume this is because the built-in recipe did not include that field by default.

After some testing, yes, it looks like the problem are the records that don't include: "config":{"choice_style":"multiple"}, accept=[],.

I wasn't able to get into the front-end in depth, but as a work-around, could you simply add this to all of the records that don't have it?

After I did that, I didn't have an issue: 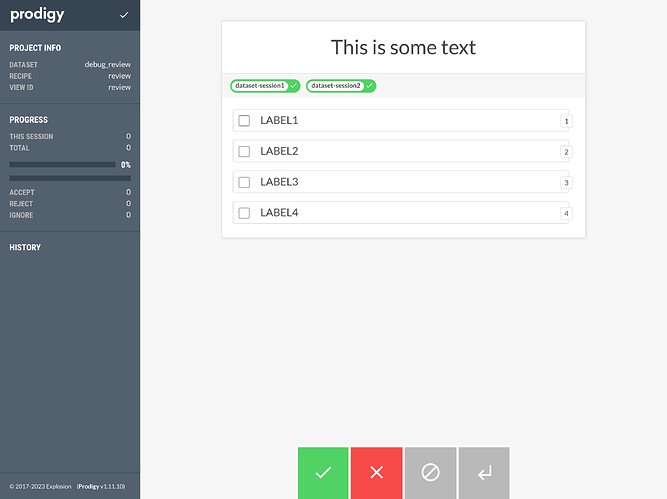 Let us know if you have any further questions!